Thank you for all who had joined us last Tuesday for our first virtual Sangha gathering!

From now on we will use Zoom, a very easy to use platform, and we encourage you all to join following the simple steps outlined below.

We will meet online every Tuesday at 6:55pm  (7pm start time) until further notice.

This Tuesday we will recite the Chenrezig Sadhana (download here)
If you are familiar with this practice, please chant along. It is also fine to just listen and follow along in your heart. All will receive the blessing.

During these difficult times the Sangha (community) is very beneficial for all to feel support and practice together for the benefit of all beings.

Our meetings are always free, but if you can, we ask you donate $1 to offset the costs for Zoom.
You can donate here.

Looking forward to seeing you all virtually on Tuesday. 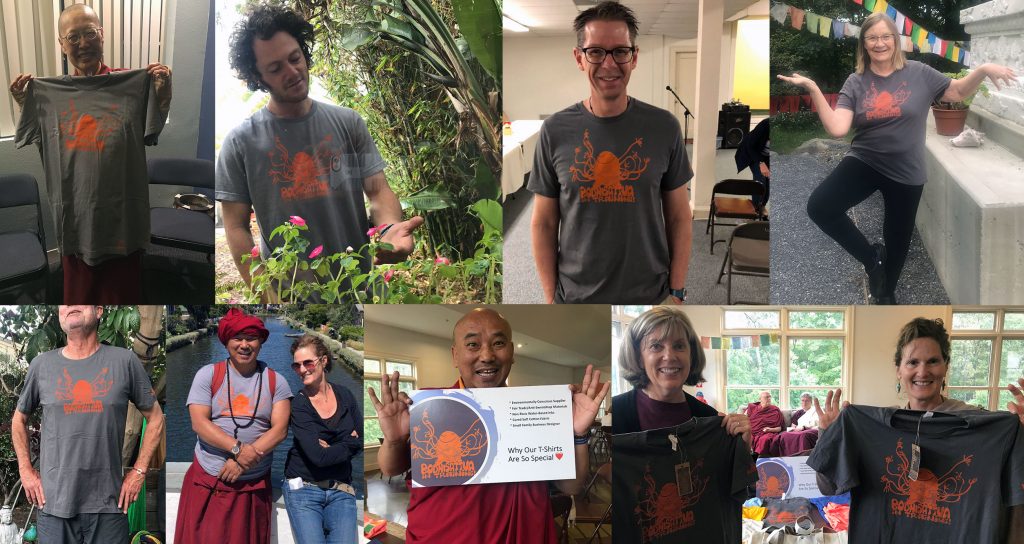 Support the rebuilding of KTC Columbus, which burned down in 2016.

Each design is individually handprinted on high quality fair trade cotton Shirts.
On the back is the Mantra “OM MANI PEME HUNG”.
20$ per shirt go directly to the rebuilding fund.

May all beings benefit!

This Lunar New Moon on January 25th commences the Year of the Rat in Chinese Astrology. Rats are known as being diligent and have a positive outlook.

We welcome you to join us at Santa Monica KTC Sangha every 1st, 2nd and 3rd Tuesdayevening for our book study (“Joy of Living” by Mingyur Rinpoche”).

We include meditation practice and watching short videos by Buddhist masters to help guide us on the path.

All are welcome to join, no prerequisites, learn as you go.

Check our calendar section for the latest schedules.

Yours friends at Santa Monica KTC

Words cannot express the sadness we and the entire family of Karma Triyana Dharmachakra Monastery feel this week as we share the news of the passing of our beloved teacher, Khenpo Karthar Rinpoche.

Khenpo Karma Tarchin Rinpoche (Karthar, for short) was in his 96th year, having just observed his birthday at KTD Monastery in September. Born in the same year as the 16th Karmapa, Khenpo Rinpoche passed away on the same lunar calendar day as the 16th Karmapa (8th day of the 9th lunar month) but in a different year.

A Buddhist master without parallel, Khenpo Rinpoche was a source of wisdom and love for everyone he met. He successfully transplanted the wisdom of the Karma Kagyu lineage in a new land, and fulfilled the wishes of both the 16th and 17th Gyalwang Karmapas. There is no way we can repay his kindness, and we are praying he will swiftly return to guide beings in this world.

For the first three days of Khenpo Rinpoche’s resting in thukdam, or meditative repose, the KTD family has been providing a quiet atmosphere for our master’s meditative rest at Karme Ling. Three days of prayers from the “Rain of Wisdom” realization songs were conducted by a small group of lamas and Karme Ling residents.

Meanwhile, letters of condolence have been pouring in from all over the world, as devotees and other religious leaders honor the example of our beloved master.  Visitors from near and far have been visiting the shrine room at Karme Ling to meditate in the same building where Khenpo Rinpoche is resting in thukdam and to make offerings to a special throne set up for him there.

Fresh prayer flags are being raised around the property and a special shrine is being assembled in the Lama House Shrine room for the three days of visitation with Khenpo Rinpoche’s Kudung, or body relic, beginning Thursday October 17 and ending on the cremation day, October 20.

Students at various dharma centers are following Lama Topden’s advice to receive Rinpoche’s blessings through the practice of Guru Yoga.
The schedule for the events of October 17 to 20 is still being developed. Watch this newsletter and the www.kagyu.org website for updates on the program.

“In thukdam, a master of mahamudra meditation rests in the unity of the Mother and Child Clear Light,” Lama Karma said. “At this time, Khenpo Rinpoche’s mind is all-pervasive, and it is a good time to practice Guru Yoga and merge your mind with the mind of your teacher as part of your practice,” he said.

A major part of the 49-Day Observances for Khenpo Karthar Rinpoche is a special set of pujas at the Karme Ling Three-Year Retreat Center in Delhi, NY that will be dedicated to Khenpo Rinpoche’s swift rebirth and vast dharma activity. KTD sangha and friends are invited to join the pujas or make offerings as they are able.

Here are the dates for the Seven-Week Pujas:

Greetings from Your Dharma Family at Santa Monica KTC. We are happy to announce our new location

We will meet in the Renaissance Room with entrance to the right side of the patio through glass doors.

There is evening parking for $2 in the parking lot across the street at 1235 2nd Street.

Join us for the Fall /Winter Buddhist book Study group:

“In Love with the World” A book by Mingyur Rinpoche

We will be using this book and its study guide that has been approved through the Tergar meditation community and Mingyur Rinpoche.

We encourage everyone to read this wonderful book, however if you have not, this discussion will still benefit everyone.

Donations excepted for the support of our Sangha activities.